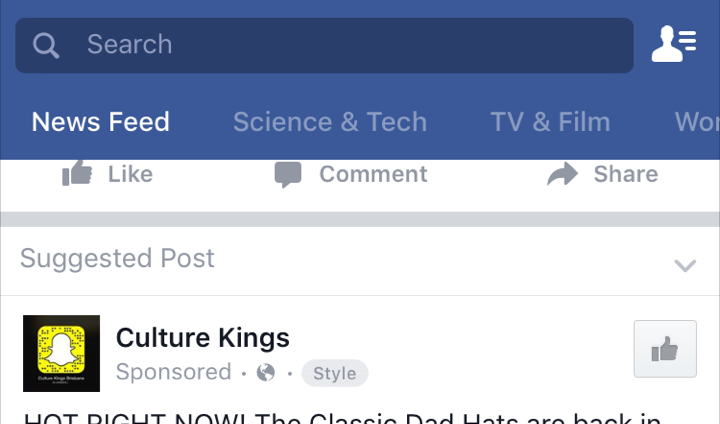 Over the past few days I’ve been playing a bit with Facebook’s news sections. Facebook, always famous for doing UX testing, seems to have stepped up their testing of late. Every time I go in there’s something new to test/look at. I wonder if they are making decisions on testing too quickly – just because I didn’t tap on the new post about Moments doesn’t mean I don’t want it. I just jumped in to Like a comment that someone made on my last Insta-share.

Facebook has now introduced sections to its main UI, and keyword tagging on news posts. One thing I do like is that a post can have multiple tags, something often missed by other news aggregators.

What I don’t really like is that…well, I don’t WANT to go to Facebook for my news topics, and it doesn’t really feel cohesive in any real UX manner. It’s a mash up of posts from my Friends, to posts from brands I follow to lots of suggested posts. Some of the sections also ask me to refine my section by selecting sub-topics from the main topic (eg Animation, under TV and Film).

Despite the wealth of data that is indicating that messaging apps are a second home screen for users, and that increasing percentages of users are getting news through their social media, and even despite my own tendency to find news through Facebook, it feels like a very awkward transition of branding from social media to news aggregator.

Let’s face it – Facebook Instant Articles are the fucking bomb. The little lightning bolt in my FB feed indicates that I don’t need to wait interminable seconds for a site to load ads I’m going to ignore, video I won’t play, and bloated code in templated that slow down my experience.

But having that speedy experience is focussed on being used by brands and news outlets that I’m already following. This is very different from being an actual news aggregator. And a very different experience from having my Friends mixed in with brands I don’t even want to follow. I’m staring at it now, and in the Science and Tech topic 2 out of the last 10-15 posts are from brands I actually followed. This isn’t useful. It’s news aggregation at its worst, because it exposes Facebook’s UI for what it isn’t – a refined presentation of News Headlines.Facebook is social media. It shows names of people and brands I know, their feelings, their likes, a snippet of conversation, a photo. It isn’t suited to headlines and snappy clickbait. In my News Feed I can feel like my ‘Like’ of The Guardian, is really a Like. It’s in my Feed because I deliberately chose it or I was marketed to as a segment, not because some Facebook algorithm is putting it next to Makeuseof, Geek.com, Physics-Astronomy and a dozen other brands I’m not interested in following. In the Facebook UI, each post is 3/4 of my iPhone screen. It’s a lot of work to ignore a brand and story I don’t like.

That’s not how news aggregators should work. It needs to be easy to move through the list.

I’m not sure if Facebook should be looking to go down this path.

Especially when Facebook recently went through the allegations of bias in their Trending Topics feed (something I’ll get to in a sec…). Indeed, I was recently hit by a survey on Facebook that asked the interesting question (slightly paraphrased) – “is the work that Facebook does good for the world?”. WOW, how can you even answer THAT?

There’s a few things to deal with here. As usual, I’m seeing these as interrelated as part of a large strategic shift, this time in the content publishing industry.

Temper the idealism with cold reality. Find an opinion. Take it, do good for that, and the hell with the rest.

We’re increasingly seeing tech companies mature into organisations with an opinion. Facebook could do the same.

And when they do, I think we could see this attempt at news mature into something much more interesting.

One thought on “Do you have a moment to talk about news feeds?”